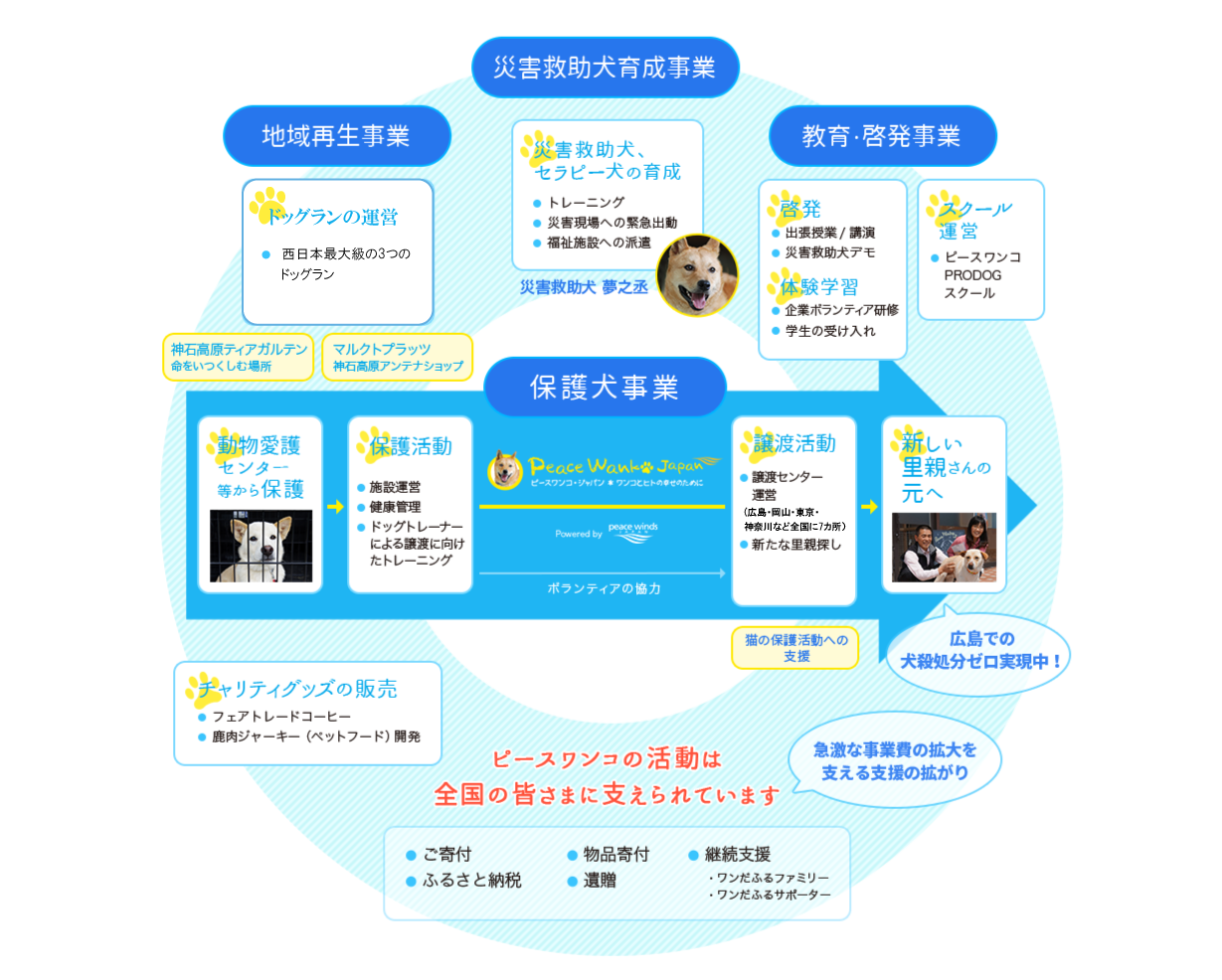 According to the Ministry of Environment, while the number of cats and dogs euthanized are starting to decrease, in 2018 alone, more than 38,000 were euthanized.

PeaceWanko Japan works under PeaceWinds Japan focusing on preventing the unnecessary deaths of cats and dogs as well as providing shelter and care for these abandoned animals.

We started this project as a way to pay back to our ‘friends’ that have helped us in times of need as therapy dogs, search and rescue dogs etc.And with the experience we have built up over the years we believe that we can help achieve the societal change we would like to see in the world. 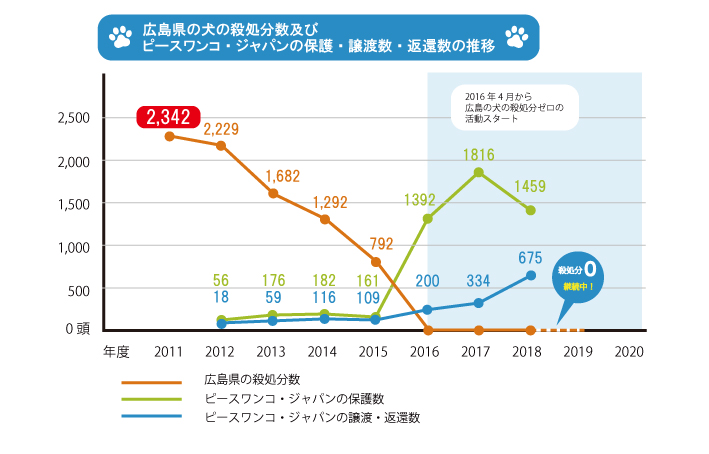 In Hiroshima Prefecture, where PeaceWanko is based, the number of cats and dogs euthanized in 2011 was the highest in all of Japan with 8,340 dogs and cats (2,342 dogs and 5,998 cats) killed.

In the fall of 2013, the project “1000 days of zero dogs euthanized in Hiroshima” was started and finally achieved in April 2016.

By the end of May 2019, the number of consecutive days we achieved our goal of zero dogs slaughtered reached 1156. The number dogs adopted or returned to their original owner reached over 1500. As for cats, we support and work with other groups that work on the protection abandoned cats so that we can achieve the goal of zero slaughter for both dogs and cats.

Currently, there are four shelters such as the one in Jinseki-Kogencho, Hiroshima Prefecture with a total yard size of around 4200 square meters to let the dogs run about. There is also a separate dog run of about 8,000 square meters in totalalso providing an environment where dogs can run around freely. 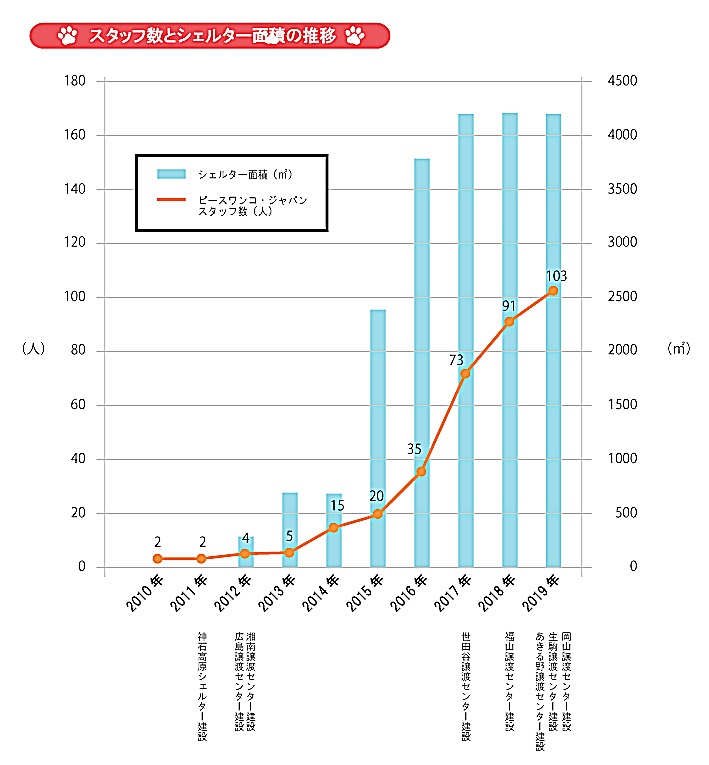 In particular, since 2016 after the zero slaughter goal was achieved(It must be noted that we do not include ‘compassionate’ euthanasia in which dogs are put down due to decreasing quality of life due to old age or sickness), the kennel area was expanded to approximately 3400 square meters.Adoption centerswere also opened in Hiroshima and Shonan (Kanagawa Prefecture) in 2014 and since then 1 new center has opened every year bringing the total number of adoption centers to 7.

With the expansion of these facilities,the number of staff has also gradually increased. Currently there are an addition of more than 100 dedicated staff, including veterinarians, cleaning staff, as well as a large number of registered volunteers.

While we have managed to achieve our goal, it is becoming increasingly difficult as the number of dogs brought in increase in turn increasing the necessary costs to maintain the facilities. In 2018, dog care costs were approximately 79 million yen and medical costs were approximately 134 million yen. This includes the cost of contraception and neutering to prevent breeding on the premises and to properly manage the sheltered dogs. 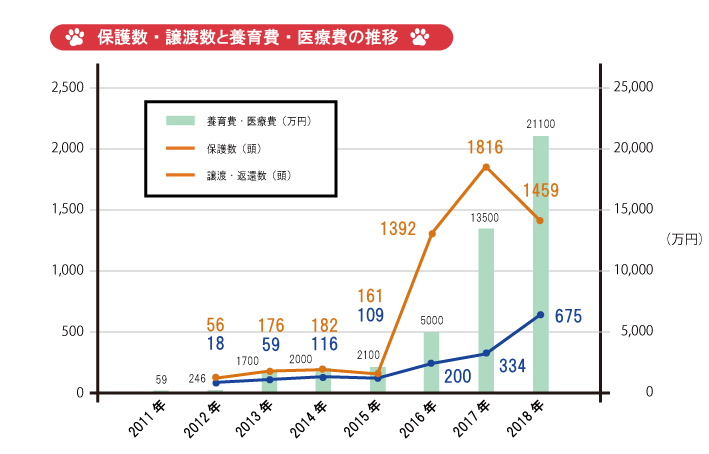 Most of these expenses are covered by donations from supporters nationwide through hometown tax payments and supporter systems.

While saving the lives of dogs on the brink of being euthanized is very important, we also work on education and increasing awareness so that the number of dogs that need saving decreases.

In addition, we also conduct educational activities in various forms such as on-site classes, lectures, and educational events for a number of parties including companies, schools and potential foster parents. Going forward, we hope to further strengthen cooperation with local governments and animal protection groups to establish a sustainable way of achieving our goals.

How we rescue dogs 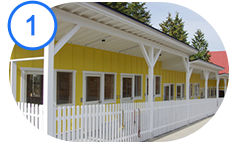 First, we have to make sure there is appropriate space and equipment at one of our 4 shelters and prepare. 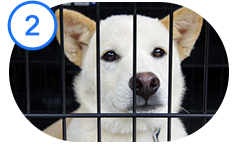 Transfer to our facilities

Ever since April 2016 we began to take in all dogs scheduled to be euthanized within the Hiroshima Prefecture in order to achieve our ambitious goal of zero dogs slaughtered. 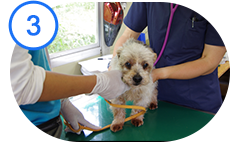 Health check conducted by a veterinarian

Once the dog is transferred to one of our facilities a one on one health checkup is conducted by a veterinarian. 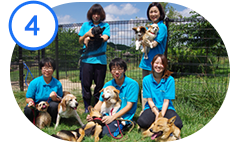 Teaching discipline through a dog trainer

Over 90 paid staff including specialists such as dog trainers, veterinary nurses, and veterinarians oversee dog care and work to prepare the dog for adoption or training. Staff have migrated from all over the country to Jinseki-Kogencho and have been working to help create and revitalize the community in an aging region. 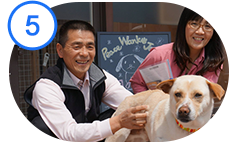 Dogs up for adoption will be transferred to one of the 7 adoption centers across the country. In 2018 alone 669 dogs found new families.

In addition, a new facility has opened next to our shelter in Jinseki-Kogencho, the ‘Jinseki-Kogencho Tiagarden’ that allows guests to connect with the shelter dogs with guided walks and other programs that encourage bonding. Click here for details
Pocket